My ex husband Scott Macklin and I did many of the Harvest Festivals together. We had a booth at the Los Angeles Harvest Festival in the mid 1980's and my new Ear Wrap and Ear Cuff line was selling well. Before continuing with this story, I should note that I don't watch T.V; only attend two or three movies a year and I don't read Hollywood magazines. On this particular weekend, the L.A. Harvest Festival was packed and our booth was crowded with customers wanting to buy my ear cuffs and wraps. A gregarious black woman with dreadlocks tied up in a bandana excitedly pointed to several sets of my most outrageous ear wraps. Because her ears were unaccessable under the bandana she declined our offer to try them on and impulsulvly asked us to box up three sets. Our customers always want to try on the ear pices so this was unusual. It was also unusual for a customer to buy three sets and not to inquire about the price. We asked her how she would like to pay and a blond man stepped forward wielding a checkbook. It was a new account without an imprinted address and the check he wrote for the purchase was #103. Against our better judgment we took his check, thanked them both and they vanished into the crowd. Moments later our booth was inindated by a dozen of our fellow craftspersons demanding to know what she bought? We were confused; Who? What? The unanimous reply was, Whoopi, that's who! Even with this information, Scott and I were still confused since at that time, we had not yet heard of Whoopi Goldberg. 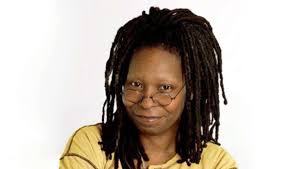